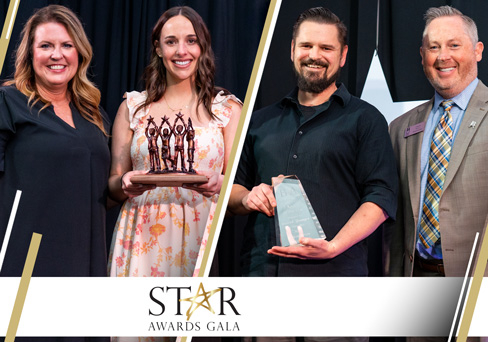 At its annual Star Awards Gala, Broken Arrow Public Schools announced Rosewood Elementary teacher Kelsee Arnold as the 2022 District Teacher of the Year and Options Academy Security Guard Derrek Younger as the winner of the Beyond & Above Award, which is given to the district’s top support employee.

During this sit-down dinner event held at Stoney Creek Hotel, 31 Site Teachers of the Year were formally introduced, five were named as finalists and Ms. Arnold was honored as the District Teacher of the Year.

“My classroom is a safe, supportive community of learners, and my students’ voice, needs and strengths drive my decision making,” said Arnold, who has been a teacher for 10 years. “I believe every child is capable of achieving greatness and has unique strengths and talents that set them apart from others. As educators, we are given the privilege to empower our students to believe this as truth themselves. And as a teacher, believing this truth, and using this to guide decision-making, can be paramount in promoting student learning.”

In addition, five staff members were recognized as Support Staff of the Year finalists, and Options Academy Security Guard Derrek Younger was presented with the Beyond and Above award for consistently going the extra mile in support of the district’s goals and objectives.

“Mr. Younger is so much more than just a security guard,” Options Academy Principal Shannon Turner said.  “He impacts the lives of both students and staff on a daily basis.”

In addition to making the safety of students his top priority, Younger has reached out to students by teaching them how to play chess and helping with social and emotional issues. He has also organized the bi-annual graduation ceremonies for the Options Academy, including designing the program and helping the student singer of the national anthem. As a musician himself, he also started a music program at Options, writing grants to help acquire various musical instruments, inviting the students to learn and play along with him.

Nominations for the Beyond and Above award were made by principals, teachers, administrators, supervisors and coworkers. A five-member committee consisting of site and district administrators conducted a review of all candidate nominations before spring break.

Flintco helped sponsor the Beyond & Above Award, providing cash prizes to each of the five finalists. The BAPS Foundation awarded cash prizes to all 31 Site Teachers of the Year as well.