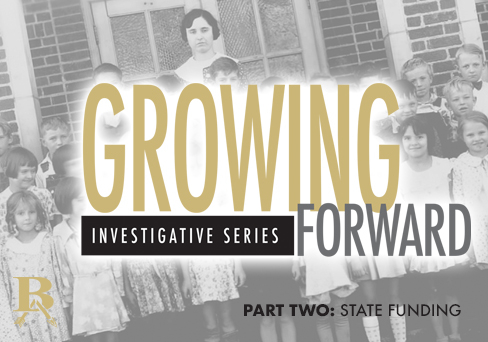 During unprecedented times where flexibility and change can sustain organizations, Broken Arrow Public Schools must rely on funding resources from various streams, but the most vital part comes from “state aid”—nearly half of the overall budget.

Comprised of foundation and incentive aid, state aid is determined and allocated by a variety of factors for a school district. Depending on enrollment or sub-population of students (i.e. gifted, special education, English Learners, etc.), funding can be gained or lost from year to year. But the largest factor for funding is determined by the common education budget passed by the Oklahoma State Legislature.

“During the past 10 years, common education has seen a fluctuation of state funding based on how the state economy is performing,” said Natalie Eneff, BAPS chief financial officer. “For example, just last year Broken Arrow lost $7.4 million when the funding formula was cut $200 per student as the state tried to navigate through the COVID-19 pandemic.”

Even though some of the funding has been restored, Broken Arrow’s consistent student population growth poses a problem for a formula that has become archaic, prompting the district to fall behind in funding. A state aid task force studied the formula five years ago, but the overall findings by the team was that the formula was a good foundation for funding. However, the problem is that the formula is not sufficiently funded.

“With enrollment coming at over 19,000 students, 29 school sites and 2,000 employees, Broken Arrow must have consistent funding from the state allocated resources in order to keep a balanced budget,” said Eneff. “When there is a state revenue failure, the funding is taken out of the formula and many times is never restored. That is a problem.”

An additional budgetary constraint, part of the state aid allocation is based on student transportation numbers. Broken Arrow receives $517,000 through state aid for these students, although the budget is approximately $7.9 million to adequately fund the department.

“The formula needs to be funded adequately to ensure the state keeps up with the mandated teacher and support pay raises that went into effect. If money keeps being taken out, these raises will be the responsibility of the district to fund and many districts will not have the capability thus resulting in layoffs,” said Eneff. “Keeping the funding formula well-funded also ensures the state is keeping up with regional per pupil spending.”

Patrons are encouraged to contact their legislators to ask them to update state statutes and to let them know education must be funded first and adequately. You can search for your legislator HERE.