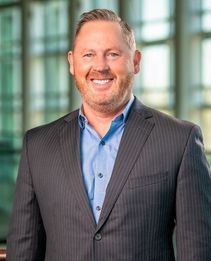 Mr. Chuck Perry became superintendent of Broken Arrow Public Schools in December 2021 and oversees all operations in a district of more than 20,000 students and over 2,400 staff members. He is humbled to be in the same role of someone he grew up admiring, former Superintendent Dr. Clarence G. Oliver, Jr.

Mr. Perry’s mom and dad graduated from Broken Arrow in 1950, his brother in 1970 and his sister in 1975. He attended Oak Crest Elementary, Sequoyah Middle School and South Intermediate High School. As a 1987 Broken Arrow graduate along with his wife Monaca, they were the first class to attend the new high school for both their junior and senior years. Other than when he was obtaining his undergraduate degree from the University of Tulsa, he has lived his entire life in Broken Arrow. Mr. Perry earned his Master of Education degree from Northeastern State University at the BA campus, which has brought him to where he is today.

Mr. Perry began his teaching and coaching career in 1992 as a teacher at Haskell Middle School and head boys soccer coach at the high school. In 1998, he continued his career in education at Union Public Schools as a teacher and coach before taking the position of assistant principal at Union High School from 2005 to 2008. He went on to serve as Union's director of athletics from 2008 through 2012 and director of secondary education for the 2012-13 school year.

In 2013, he made his way back to his alma mater and was appointed as the assistant superintendent of student services. In 2015, he helped bring the JROTC program to Broken Arrow High School. In January of 2017, he was named as associate superintendent to ensure opportunities for student engagement in the areas of fine arts, athletics, co-curricular activities and ArrowVision.

Mr. Perry will continue to uphold the district’s four core values of responsibility, learning, relationship-building and diversity every day, noting that literacy, engagement and graduation are the end goals for all Broken Arrow students. As a lifelong Broken Arrow citizen and graduate, he is a product of this district and is proud to serve the community and the school district as the district moves into the next chapter.

The best is yet to come!