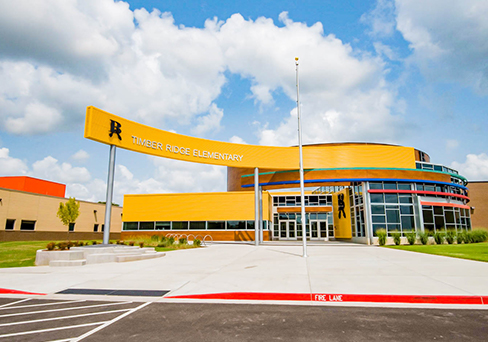 In Feb. 2015, Broken Arrow patrons passed the Broken Arrow Public Schools bond proposal, allowing the district to begin its next phase of transformation to meet the needs of a district that is growing at a rate of 3 percent per year.

The 2015 bond issue projects total $370 million and will be completed over the course of 12 years.

Timber Ridge: With more than half of the its growth at the elementary school level, Broken Arrow Public Schools added its 15th elementary school, Timber Ridge, to the list of school sites. Timber Ridge opened its doors for the 2017-18 school year. The school is located in the northeast section of the district to alleviate overcrowding issues. Amenities include 34 classrooms, four half-sized classrooms, media center, full-size gymnasium, music room, art room and science room as well as FEMA Saferoom. Within the past year, Timber Ridge received the Associated General Contractors of America’s 2018 Build Oklahoma Award for Educational $10-$20 million project category.

Sequoyah: Known as the district’s oldest active middle school, Sequoyah was completely remodeled. The old cafeteria was converted into a new media center and classrooms were added, including a newly renovated space for the district’s special education students and a fine arts wing that doubles as a FEMA Saferoom. Sequoyah also received two courtyards, one with riser seating and raised planter beds where students can learn about health and nutrition and one with basketball goals and other outdoor activity spaces. All existing classrooms received new carpet, furniture and built-in cabinets. The project also included the addition of an elevator to the two-story section of the building along with other upgrades to meet ADA accessibility requirements.

Kirkland Field Activity Complex Part One: The site formerly used as North Intermediate High School is being repurposed with special recognition given to its historical significance in the district. Plans included renovations to the current auditorium and gymnasium. Kirkland Field was repurposed as the Kirkland Soccer Complex, which features a two full-size competition soccer field. Future plans include renovations to the current gymnasium and natatorium (swimming pool).

Broken Arrow Freshman Academy: Renovations were completed at the Freshman Academy in August 2018. This project included a new media center at the front of the building to emphasize the importance of literacy at Broken Arrow Public Schools. Four science labs and 7 classrooms were added. Building circulation was increased by the addition of hallways and stairwells. New furniture for the school site was also purchased.

Phase two of the bond issue will begin this summer. For more information about the bond issue, please visit www.baschools.org/2015Bond.