2022 Great Graduates to be honored during homecoming week 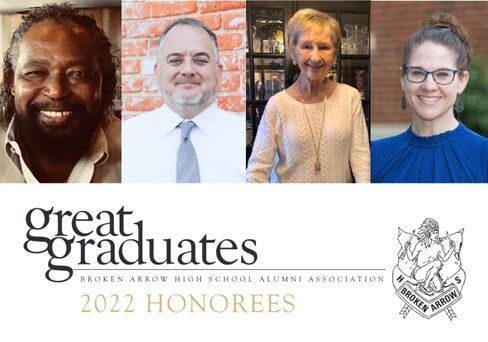 Every fall, the Broken Arrow High School Alumni Association selects a group of “Great Graduates” who exhibit strong leadership skills and remain dedicated to service within their community, bringing honor to their alma mater through personal and professional accomplishments.

Each will be recognized during homecoming week.

The Broken Arrow High School Alumni Association was revived in 1999, starting the tradition of the Great Graduates. Nominations are solicited throughout the Broken Arrow community for alumni who have modeled a selfless life of achievement and service to others for at least 20 years.

Bill Cade attended Broken Arrow Public Schools all twelve years. After graduation, he began employment with the City of Broken Arrow in the parks department. After a few months, he transferred to the sanitation department, now called the solid waste and recycling department, where he is currently in a manager position. In the 1980’s, Bill joined the 279th Infantry of the National Guard. After basic training, he returned to his employment at the city while serving in the Guard for six years.

Bill’s care and compassion for children and families prompted him to start the Sanitation Santa program. After seeing a little boy named Chris running behind his bike-riding friends, trying to keep up with them, Bill was moved with compassion. He asked the boy’s mother if he could buy her son a bike for Christmas. “She was overwhelmed that somebody would do that,” Bill said. “And to see that little dude’s face light up! I bought him a bike, and it started right there.”

They have since then delivered Christmas miracles to Broken Arrow children in need, impacting lives of Broken Arrow families for more than 40 years.

Frankie Catlett is a 1990 graduate of Broken Arrow High School. His wife, Tina Catlett, and he have been married for 26 years and have two children; daughter, Addison, a junior nursing student at Rogers State University and son, Owen, a BA Senior, both following in their father’s footsteps as members of the” Pride of Broken Arrow.” Frankie’s career at Walmart spans 34 years, the last eight years as the manager of the Hillside Store. Frankie’s awards and appointments throughout his years at Walmart are numerous.

Frankie serves on the Broken Arrow Public Schools Long Range Planning Committee, while also serving as president of the BAPS Foundation, which has raised $400k in three years. He was instrumental in BA teachers receiving $15,000 through the Walmart/BAPS Teacher Hero program.

Being a member of the Pride during his school years, Frankie is a Pride Operations Parent and a Pride Chaperone. Frankie is active in community organizations, one of which is the Broken Arrow Police and Fire Departments’ Shop with a Cops program. He has worked with the Timber Ridge Elementary School in securing backpacks for the students there. Through his leadership with Broken Arrow Neighbors, he was able to procure grants for the Back-to-School Supply Drive

Ruth Ann was born in Broken Arrow and attended all twelve grades in Broken Arrow Public Schools, graduating in the class of 1957. Numerous classmates advocated for Ruth Ann’s nomination. Many have known and observed her leadership skills for over 70 years and greatly admired her. She continued her education at Northeastern State College and later the University of Tulsa earning her Bachelor of Science degree in education and a master’s degree in Modern Letters.

Ruth Ann taught communication skills for 21 years at Tulsa Public Schools, and then was district curriculum coordinator for language arts, reading and speech arts. An avid reader, Ruth Ann had a keen interest in books about World War II and the fate of European Jews. In 1989, Ruth Ann had an opportunity to join 44 teachers nationwide in studying the Holocaust and Jewish Resistance through a three-week Summer Fellowship Program, being the first teacher from Oklahoma. From there, she developed an extensive teaching guide, “From Holocaust to Hope,” and made it available to educators.  She conducted conferences and conventions ranging from Washington, D.C. and Philadelphia, to local workshops in Oklahoma City and Broken Arrow. Her curriculum has been distributed nationwide and adaptable for students from sixth grade to adults.

In 2001, the Jewish Federation of Tulsa presented Ruth Ann with the Janusz Korczak Award for Excellence in Holocaust Education.

Gardner-Vandy then moved to Tucson, Ariz., to obtain a PhD in Planetary Sciences from the University of Arizona in 2012. While becoming an expert in the study of meteorites, she was awarded the Alfred P. Sloan Indigenous Graduate Partnership Fellowship and the NASA Earth and Space Science Fellowship. Upon completing her doctorate, she did a postdoctoral fellowship at the Smithsonian Institution’s National Museum of Natural History where she had the honor of working directly with the Smithsonian’s collection of meteorites.

Now, Gardner-Vandy is an assistant professor of aviation and space at Oklahoma State University where she teaches and studies her two favorite topics: space and flight.