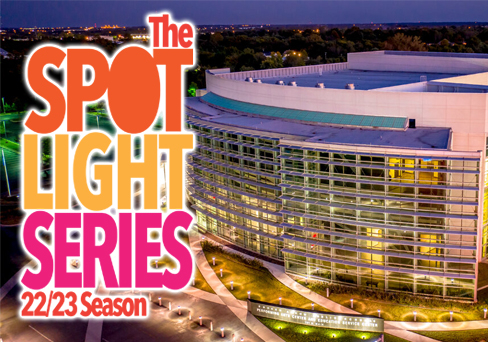 Back for an incredible 14th season, The Spotlight Series presented by AVB Bank returns with a first-class line-up, truly bringing the world to Broken Arrow! ARTSOK Inc.- The Regional Arts Alliance of Broken has been bringing the sounds of concert artists, Broadway favorites and new delights since 2009, partnering with Broken Arrow schools and Visit Broken Arrow. Tickets are available at brokenarrowpac.com or by calling 918-259-5778.

Beginning with their first performances in the early 1970s, THE MANHATTAN TRANSFER have become the cornerstones of contemporary music. Originally launched by Tim Hauser in 1969, Hauser, Alan Paul, Janis Siegel and Laurel Masse were the group by 1972. Cheryl Bentyne joined the group in 1979 after Laurel Masse left. Known for their amazing harmony and versatility, incorporating pop, jazz, R&B, rock and roll, swing, symphonic, and a cappella music, the group was signed by the legendary Ahmet Ertegun to Atlantic Records. The group made their recording debut with their self-titled album in 1975. Known primarily as an East Coast cult act, they expanded their following by starring in their own 1975 CBS-TV variety series as a summer replacement for the Cher Bono Show. Starting as an underground group in New York City, The Manhattan Transfer garnered international popularity when “Chanson D’Amour” from the 1976 Coming Out album became a number one hit in Europe.

“Buddy - The Buddy Holly Story” tells the true story of Buddy’s meteoric rise to fame, from the moment in 1957 when “That’ll Be The Day” hit the airwaves until his tragic death less than two years later on “The Day The Music Died.” The show features over 20 of Buddy Holly’s greatest hits including “That’ll Be The Day,” “Peggy Sue,” “Everyday,” “Oh Boy,” “Not Fade Away,” “Rave On” and “Raining In My Heart,” plus Ritchie Valens’ “La Bamba” and The Big Bopper’s “Chantilly Lace.” The incredible legacy of the young man with glasses, whose musical career spanned an all-too-brief period during the golden days of rock & roll, continues to live on in “Buddy.”

The Vienna Boys Choir, renowned as one of the finest vocal ensembles in the world for over 5 centuries, is a frequent visitor to North America, performing throughout the country in everything from houses of worship to great concert venues like New York’s Carnegie Hall and Chicago’s Symphony Hall. The enormously popular chorus is actually comprised of four separate ensembles of 23 - 26 boys each, totaling 100 choristers at the Vienna Boys Choir’s school at any given time - all of them between the ages of 10 and 14. The four choirs are of equal standing, and the Vienna Boys Choir’s tours, concerts in Vienna and audio and video recording projects are shared among them.

Voctave: Sounds of the Season

A cappella sensation Voctave has had over 150 million social media views of their videos, and their latest album, The Spirit of the Season, Deluxe Edition, reached No. 6 on the Billboard charts. Their previous album, The Corner of Broadway & Main Street Vol. 2, debuted at number 3 on the iTunes charts. Formed in 2015 by producer and arranger Jamey Ray, the voices that bring their arrangements to life represent a wealth of diverse backgrounds and musical experiences.  Hailing from Central Florida, the eleven members of Voctave have performed across the globe and appear on countless recordings.  The group has performed with GRAMMY, Dove and American Music Award recipients including Sandi Patty, Pentatonix’s Kirstin Maldonado, Mark Lowry, David Phelps, and Jody McBrayer. Voctave’s eight albums are digitally available on all platforms.

“On Your Feet!” The Story of Emilio & Gloria Estefan

“ON YOUR FEET!” is the inspiring true story about heart, heritage and two people who believed in their talent—and each other—to become an international sensation: Gloria and Emilio Estefan. Now their story is an all-new exhilarating original musical winning the hearts of critics and audiences alike, with the Chicago Tribune declaring “IT’S A HIT!” and The New York Times cheering, “The very air in the room seems to vibrate in this undeniably crowd-pleasing musical!” ON YOUR FEET! features some of the most iconic songs of the past quarter-century, including “Rhythm is Gonna Get You,” “Conga,” “Get On Your Feet,” “Don’t Want To Lose You Now,” “1-2-3” and “Coming Out of the Dark.” Prepare to be on your feet from start to finish!

Jessica Vosk is a celebrated singer and actress known for stirring roles on the musical theater and concert stage. Vosk made her Carnegie Hall debut in November 2021 in a sold-out solo show titled “My Golden Age.” Other upcoming concert debuts include London’s Cadogan Hall in 2022. Before the infamous shutdown, she starred as the Narrator in the 50th anniversary of “Joseph and the Amazing Technicolor Dreamcoa”t at Lincoln Center. She also created the role of Aunt Val in the world premiere of “Becoming Nancy,” directed and choreographed by Jerry Mitchell. Before that, Vosk finished an acclaimed run as Elphaba in “Wicked” on Broadway, having played the role for two years. Vosk starred in New York City Ballet’s Jerome Robbins tribute “Something to Dance About,” directed by Warren Carlyle, and re-created the role of Fruma Sarah in the most recent Broadway revival of “Fiddler on the Roof.”