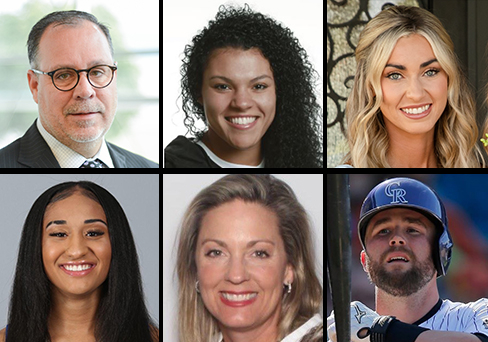 Broken Arrow’s winningest basketball coach and five athletes who competed at the NCAA Division I level will be inducted into the Broken Arrow Athletic Hall of Fame during halftime of the Tigers football home opener against Union on Friday, Sept. 2.

Stecker compiled 252 wins in his 14 seasons as head coach of the Tigers. His teams qualified for the state tournament seven times, and he has a career playoff coaching record of 30-17. Stecker’s 2001 team became the school’s first and only national Top 100 ranked team, reaching No. 52. He is a four-time Oklahoma Coaches Association Region 7 Coach of the Year, three-time Frontier Valley Conference Coach of the Year, three-time Coach for the Jim Thorpe All Star Game, twice named Tulsa World Metro Coach of Year, was named an Oklahoma Basketball Coaches Association District 7 Coach of Year, and selected to coach in the 2005 All-State Games.

Barker, a 2015 graduate, is the most-decorated swimmer in school history. She earned High School All-American honors as a sophomore, junior, and senior. Her state swimming medals all came in sprints: four in the 100-yard freestyle and three in the 50-yard free. Barker holds school records in the 50-, 100-, 200-, and 500-yard freestyle, and the 100-yard breaststroke. She was the state’s top swimming recruit as a senior and signed to swim at the University of Kansas.

A 2016 graduate, Dobson placed second at the Class 6A State Girls Golf Championships as a senior with rounds of 75-72 for a 147 total. She was as named the Tulsa World All-Metro Golfer of the Year that season, winning five tournaments, including the East Regional Title with a round of 72. She also was named the 2015 Wendy’s High School Heisman Female Award winner for Broken Arrow High School. Dobson was a four-year letter winner at the University of Tulsa. She finished her Golden Hurricane career with a 76.2 stroke average (7,237 strokes) in 95 rounds of golf.

Another 2016 alum, and current Assistant Coach for the Lady Tigers Basketball Team, Gaulden was part of two consecutive state championships in girls basketball. During her a four-year letter-winning career the Tigers went 92-21, reaching the state tournament each season. Along with twice being named Tulsa-Metro Player of the Year, she also was named Tulsa World First Team All-State as a senior. After making 80-three pointers her senior season in BA, she signed with the University of Tulsa where she continued to excel on the court. The four-year letter winner played in 111 games, starting 88, and finished her career ranked fourth in three-point field goals made (165) and seventh in assists (321) on TU’s all-time career list.

Miller graduated in1989 and was a four-year varsity starter who played on the ’86, ’87 and ’89 Tigers girls state championship soccer teams. She was named all-conference four times as well as being named All-Metro and All-Region. During her college career at the University of Arkansas, Miller recorded 38 goals, registered 16 assists and totaled 92 points. She was selected as a NSCAA All-South Region Third Team honoree in 1991. Miller is a five-time Olympic Development Player, a 1989 US Olympic Festival Silver Medalist and is a member of the University of Arkansas Athletic Hall of Honor.

Williams, a 2004 graduate and current Broken Arrow Baseball Assistant Coach built upon his Tiger baseball years by playing three seasons at the University of Oklahoma and spending 11-years in professional baseball. As a teenager, Williams played in the 2003 and 2004 Junior Sunbelt Series and in the 2003 Area Code Games. As a three-year starter with the Sooners, he was twice named All-Big XII second team. He was overall selection in the 2007 Major League Baseball Draft by the San Francisco Giants. He was a four-time San Francisco Giants Organizational Gold Glove winner, given the top defensive catcher in minor league system. Williams played parts of two seasons (2014 Colorado Rockies) and 2015 (San Francisco Giants) in the major leagues.

The 2022 Hall of Fame class will be honored at the Varsity Training Center/Varsity Club on the Broken Arrow High School campus during a reception prior to the Sept. 2 game.