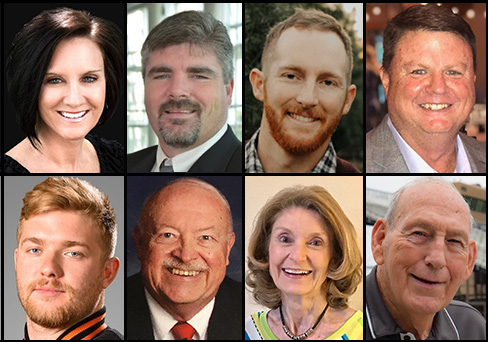 Three football players, a high school All-American baseball player and a dual-sport female athlete will be joined by three “Friends of Athletics” as inductees into the 2021 Broken Arrow Athletic Hall of Fame.

Avery-Cheatham was a guard on Broken Arrow’s first girls state championship basketball team in 1983. During the six-on-six era, Avery led the team in steals and blocked shots, as a senior. Coach Jerry Waymire described “Andy” as “very quick and a great ball handler.” She was a four-year starter in softball, and hit a combined .350 during those four seasons. The four-year starting shortstop and leadoff hitter eventually signed with Northeastern State University, where she started as a freshman.

Blackburn, now the executive director of student services, was an all-state football player for the Tigers in 1989. He also earned All-Conference and All-Metro First Team recognition that season. Blackburn played four seasons at Pitt State University and was a member of one National Championship team and two runner-up squads. In 1993 he earned All-District Academic and MIAA All-Academic honors and was an all-conference defensive player.

Cobb, along with being a high school All-American, was a two-time Louisville Slugger honoree and was a starting pitcher for the 2011 State and National Champion Tiger baseball team. Cobb was a four-year letter winner at Oklahoma State University and was drafted in the eighth round by the New York Mets.

A three-year starter as a kicker, punter and receiver, Myers was named the 1989 Tulsa Tribune Player of the Year, Daily Oklahoman “Elite 24” kicker and OSSAA All-State. He set a school record with a 49-yard field goal that lasted until 2004. Myers was also a three-year soccer letter winner. He was a 1990 All-State Soccer Midfielder and earned All-State Honorable Mention in 1989. He kicked collegiately at Oklahoma State University, leading the team in scoring in 1991.

Veatch was a two-way starter for Broken Arrow’s 2011 state runner-up football team. He was named All-State tight end by the Oklahoma Coaches Association and All-State defensive end by The Oklahoman. He was ranked by SuperPrep as No. 39 among prospects in the Midlands region, No. 10 overall in the state of Oklahoma by Rivals, and No. 48 by Scout among all tight ends in the country. Veatch was a three-year starter at four different positions at Oklahoma State.

Clark served as “the voice” of Broken Arrow Tiger Football for more than 20 seasons, beginning at Kirkland Field and continuing his Friday night public address work at BA Memorial Stadium. He continues to serve as public address announcer for the Pride of Broken Arrow, basketball, baseball, softball, track and wrestling.

Gipson was an English teacher at Broken Arrow’s North Intermediate High School from 1991 to 2007. She and her late-husband Russ have been Tiger football season ticket holders since 1988. Since her retirement, Gipson has served the athletic department in several areas, including football season ticket sales and game-night Varsity Club events. She also is a long-time member of the Athletic Hall of Fame committee.

Mosby has been a part of Broken Arrow athletics for more than 50 years, starting his career as a teacher, junior high football, wrestling and track coach and bus driver. When Memorial Stadium opened in 2000, Mosby, who retired the year before after more than 30 years, came back to the athletic department part time as an event manager. He was responsible for things such a visitor bus parking, completion of event workers’ paper work, opening visitor and officials’ locker rooms and informational sign posting on game days.

The 2021 class will be inducted in the Varsity Club prior to the Tiger varsity football home-opener against Jenks on Oct. 1. The group will be introduced to fans at halftime of that night’s game.