Today
Sunny, with a high near 82. Northwest wind around 5 mph becoming southwest in the afternoon.
Tonight
Mostly clear, with a low around 61. Southeast wind around 5 mph.
Saturday
Mostly sunny, with a high near 86. South wind 10 to 15 mph increasing to 15 to 20 mph in the afternoon. Winds could gust as high as 30 mph.
Weather forecast provided by weather.gov.
SearchFront Page Link 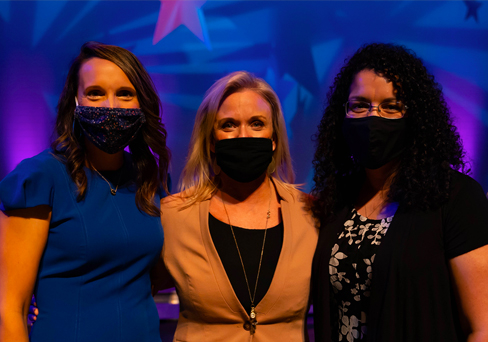 At its annual Star Awards Gala, Broken Arrow Public Schools announced Rosewood Elementary teacher Michelle McCarver as the 2021 District Teacher of the Year and Creekwood Elementary principal secretary Nikkoli Keigley as the winner of the Beyond & Above Award, which is given to district’s top support employee.

“It’s an honor to celebrate our teachers and support staff who continually make it their mission to represent Broken Arrow Public Schools with incredible leadership and excellence every day, especially during one of the most difficult years we’ve experienced in education,” Superintendent Dr. Janet Vinson said. “The dedication these individuals have shown to our students and staff is what makes Broken Arrow Public Schools such a special place.”

During this event held at the Broken Arrow Performing Arts Center, 29 Site Teachers of the Year were formally introduced, five were named as finalists and Ms. McCarver was honored as the District Teacher of the Year.

“I know where I want my students to go, and I work relentlessly to help them achieve it,” said McCarver, who has been a teacher for 11 years. “My own philosophy has been, ‘if I’m not happy teaching it, they won’t be happy doing it.’ Nothing is on my lesson plan without it being sealed with my excitement in the execution.”

In addition, five staff members were recognized as Support Staff of the Year finalists, and Creekwood Elementary’s Nikkoli Keigley was presented with the Beyond and Above award for consistently going the extra mile in support of the district’s goals and objectives.

“Nikkoli Keigley exemplifies what it means to be a Beyond and Above Tiger,” said coworker Lindsey Moberg. “She works tenaciously every day to ensure our Creekwood staff and students have everything they need to be successful. Nikkoli tirelessly and efficiently provides the staff with service above and beyond what is expected.”

Nominations for the Beyond and Above award were made by principals, teachers, administrators, supervisors and coworkers. A five-member committee consisting of site and district administrators conducted a review of all candidate nominations before spring break.

Flintco helped sponsor the Beyond & Above Award, providing cash prizes to each of the five finalists.

“Each staff member recognized at the Star Gala plays an important role in educating, equipping and empowering a community of learners,” Vinson said. “Because of their passion for our students, Broken Arrow Public Schools has remained one of Oklahoma’s premier school districts, even in the midst of a global pandemic, and for that, I’m grateful.”