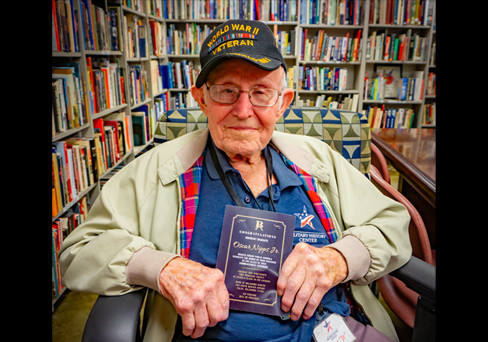 After dropping everything to serve his country during World War II, Broken Arrow veteran Oscar Nipps Jr. will graduate from Broken Arrow High School with the Class of 2020 at 8 p.m. on June 30 at Memorial Stadium.

“When our district learned of a local war hero who never finished high school because he chose to protect our country and then later raise his family, we knew we needed to honor him,” Broken Arrow Public Schools Superintendent Dr. Janet Dunlop said. “Our district is overjoyed to celebrate a man who is the definition of perseverance and sacrifice. His story is a great lesson to us all, especially our graduates.”

Nipps, a Broken Arrow native and longtime resident, was drafted Dec. 7, 1943, two years to the day after Pearl Harbor. He was a rifleman and company cook with the 1st Cavalry Division and participated in the hard-fought campaign to liberate the Philippines from the Japanese. He was on the front lines for 63 days with no relief and very little food. On Sept. 2, 1945, he witnessed history on board a ship in Tokyo Bay as Japanese officials signed on the dotted line, formally surrendering and ending World War II.

“This man deserves to receive his diploma, and I couldn’t be more excited that he is going to be part of the 2020 Broken Arrow High School graduating class as an honorary graduate,” Alexander said. “I anticipate when Oscar Nipps Jr. is announced on June 30, the town of BA will hear the roars from Memorial Stadium as we praise his accomplishments. It will be a fantastic moment as we say ‘thank you.’”

“This diploma is a token of appreciation for all he did for our country and our community,” Dunlop said. “Mr. Nipps is officially part of the Broken Arrow Public Schools family, and we couldn’t be more thrilled to celebrate him.”

Additionally, Nipps will receive a commendation signed by Governor Kevin Stitt for obtaining his diploma from Broken Arrow High School at age 94.

The Class of 2020 commencement ceremony will be live streamed via the district’s YouTube channel.